Another garden-based synth jam to celebrate Stuart’s purchase of an Arturia Matrixbrute and Studiologic Sledge 2.0 Me: Elektron Digitone, Novation Circuit, Alesis Samplepad pro (rather badly at the start!) 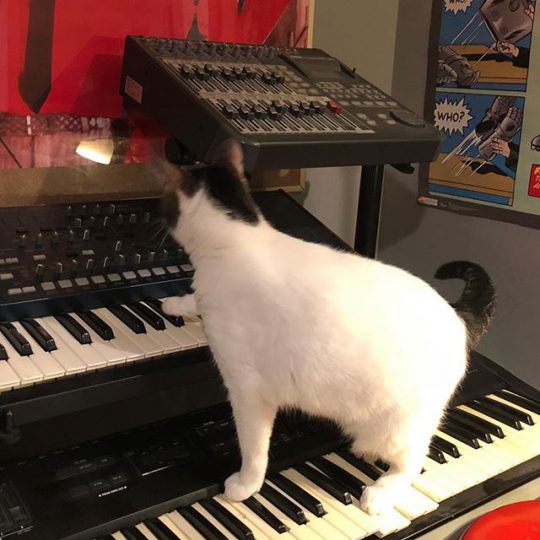 No, this isn’t Sam Sam, though this cat does look a bit like her from behind.  This is the cat that lives with synthguy216, who shares this photo via Instagram.  He has certainly mastered the art of playing two-tier keyboards 😸 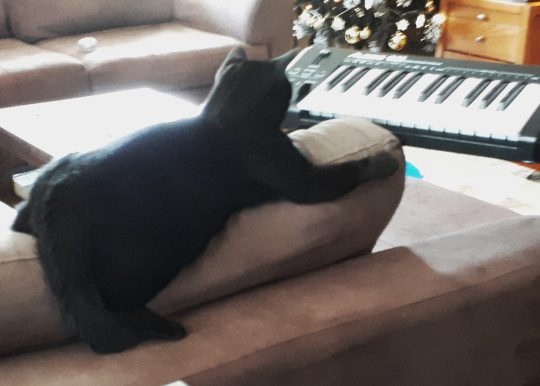 Cat with an Alesis keyboard – I’m pretty sure it’s a Q25. From Matty Dread via the Facebook group Synthesizer Freaks.

Aha. I knew it.
Finally caught the cat remapping control messages to the mod wheel.

Synth jam with Alesis Photon, iPhone, and cat 😻. From victimasdelspleen on Instagram.

From Ebotronix on YouTube, via matrixsynth. Quite the modular synth collection in this recording, plus one cool cat.

Another picture featuring Miles the cat, this time with an Alesis Micron. From L.T., via matrixsynth.

“Seems Miles the Cat is developing a keen interest in synthesizers and such.”

If you would like to submit your own cat-and-music pictures, you do so via Facebook, by tweeting us @catsynth, or contacting us.

iPad docks seem to be a theme this year at NAMM. Basically, these are high-end iPad shells that provide audio and MIDI I/O functionality. Consider the iStudio from Behringer.

The iPad fits into the dock and serves both as the computer and screen. The dock provides several controls one would find in a small portable studio and then a host of standards I/O ports on the back, including XLR, 1/4″ audio, video and MIDI.

But no sooner had I encountered the Behringer model than I came across a very similar one from Alesis:

Here, the Alesis iO Dock is controlling the Korg iMS-20 iPad Synth. Like the Behringer, it has XLR, MIDI, unbalanced audio and video. They even both have footswitch inputs.

So which one is better? It’s not really something I can say. They seem more focused on people who want to use their iPad as a workstation rather than as a live instrument the way I do, which requires being able to move it freely (and switch to portrait mode) and lift it show to the audience. But now that several companies are coming out with docks, maybe we will see more variations.

This one in via Silent Strike who composed the tracks for the app with a Clavia Nord Modular 1, Micron Alesis, Jomox Mbase, Reason 4 Propellerheads, M-audio Axiom 25, Elektron Drumachine (pic at the bottom of this post). The app does not allow you to manipulate sound, but I thought it was interesting to acknowledge some of the gear used to create the audio for this app. The Waldorf Blofeld and Yamaha AN200 pictured however were not used.

Looks like Silent Strike had a studio supervisor involved.

There is also info on the app itself.

Gravitarium 2 combines music, art and science in one relaxing experience. Use all your fingers to guide the star flow. You can create 10 different animations depending on the number of fingers touching the screen:

Use different options to create spectacular drawings made of stars. You can load the “Drawing” preset from the “Options” screen.

I will be taking a look at this app. The idea of creativity and relaxation does appeals to me, but the game-play part is a bit less exciting – though it is the trend in the mobile-app space.