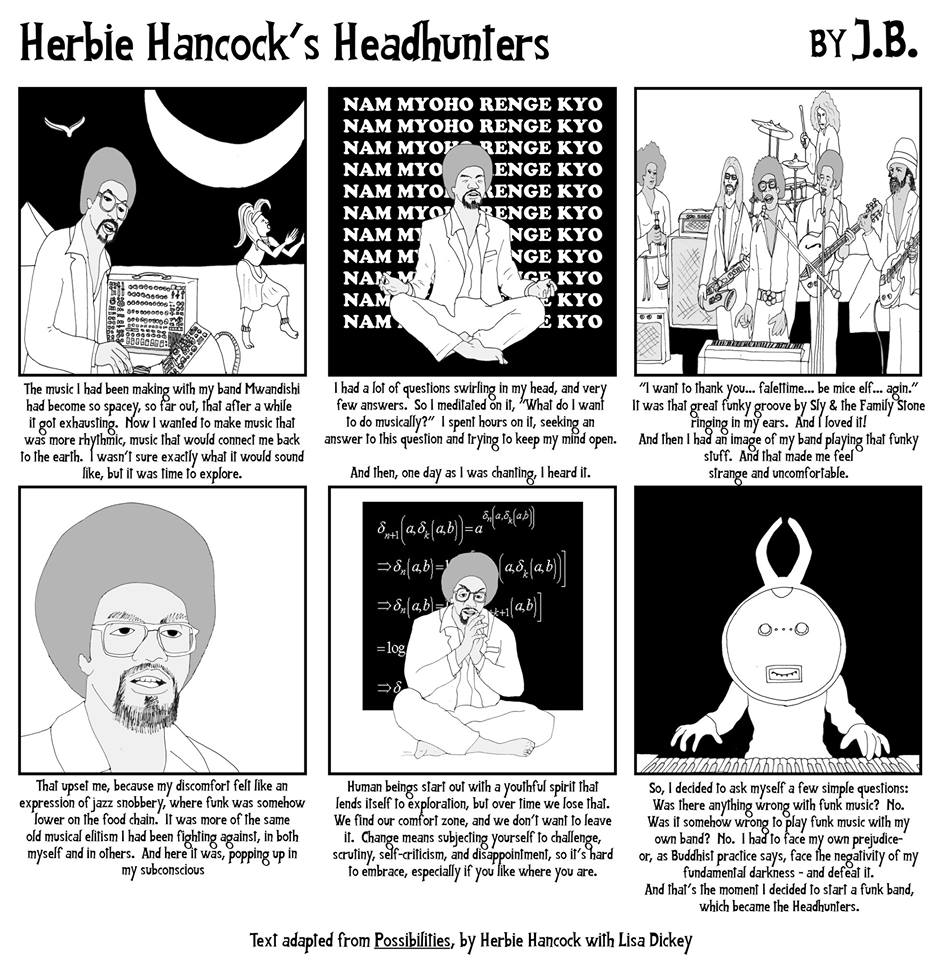 After a long hiatus, we have a new cartoon from J.B. (aka Jason Berry) today.  This one features the story of Herbie Hancock’s transition to his funk band Headhunters, as related in his memoir Possibilities (by Herbie Hancock with Lisa Dickey).

Healing after a major medical procedure leaves one with quite a bit of time for reading. This was the case for me in July and August. Today we look at the first of a few books I completed during that time.

Possibilities is Herbie Hancock’s autobiography released in late 2014, not long after I saw him accept his lifetime achievement award at the SFJAZZ gala. Like the gala event, the book attempts to weave together the earlier (and in my opinion best) work with his continuing to be vital and creative artist. It didn’t change my over all assessment of his music – I revere what he did in the 1970s with The Headhunters and Mwandishi as close to musical perfection, but shrug at what most of what he did in the 1980s through the end of the century (with notable exceptions like Rockit).

Throughout the book, Hancock and his co-writer Lisa Dickey weave together personal life with several different aspects of music – the music itself, the engineering, the business, and relationships. It is the mixture of all of these that makes for an interesting read, especially when placed in the context of the music. Hancock’s Buddhist practice permeates the entire story. One sees how it was a beneficial force for him personality and also affected his music, particularly with the open structure of Mwandishi and then in Head Hunters and Thrust. One of the fun anecdotes here was the naming of Actual Proof, and a discussion of how the piece got its confounding rhythm. The language is detailed enough that it gives me insight into the musical process – but not so overly technical that non-musicians should be able to get something from it as well.

He also goes into great detail about his dive into music technology through synthesizers; and his collaborations with engineers to push the instruments. I of course knew the story of the Fender Rhodes entering his music via Miles Davis; and the use of the Arp Odyssey in Head Hunters. I didn’t realize just how much he was involved in customizing the instruments for his live performances, taking advantage of his own electrical-engineering background and numerous long-time collaborations. I was particularly intrigued by the story of the vocoder (a Sennheiser VSM201) and prototype “keytar” featured in Sunlight. I also have seen that some of these sounds and elements are used by critics against him as “selling out” or some such thing. Such criticisms have long bothered me because it dismisses is best work, and the work I most love. Hancock himself seems unbothered by that and focuses on his need to explore new musical styles, ideas, and technologies – like Buddhism, this a theme that keeps recurring throughout the book. After delving into deep technical and musical detail about one song or one performance, he then simply moves on to the next.

The personal details are of course part of the story, but sometimes difficult to read. There is tragedy in his family. And he struggled at various times with drugs – the candid story about his being a closeted crack user in the 1990s was unexpected. But it is primarily the music and “story of the music” where my attention settled, and where I got the most from the book. It has in a way added to my enjoyment of the music.