Casio the tabby cat finds a comfy spot in this cozy bedroom studio. By Kris Nicholson via Facebook.

This little bedside studio is designed for me not to get out of bed and it’s not just a little music studio but also I can create my computer animations using Poser.

I’m using a Korg microSTATION Music Workstation and iPad Pro loaded with music apps and synthesizer apps and also you can see my cat her name is Casio.

He always wants to be wherever the action is, and at that moment the action was in the studio, where I was editing our latest episode of CatSynth TV, which itself has a feline theme.

We are excited to announce the release of Highway☆ 1.2.0 for iPhone and iPad!  It is available in the Apple App Store.

This new version includes some of our most requested features. 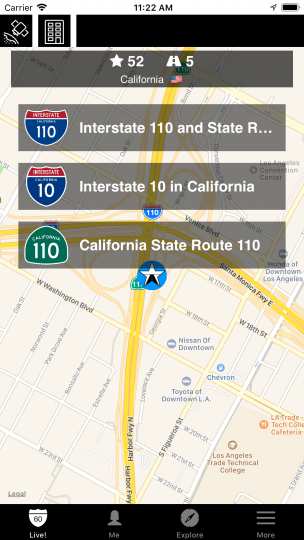 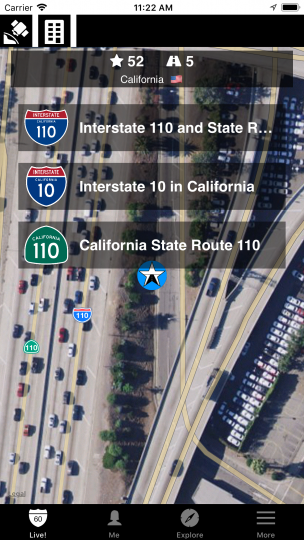 There many more features we have in store, but for the moment we turn our focus to the 1.2 version for Android.  And we are looking forward to putting the app through its paces on our upcoming road trip to NAMM 😺 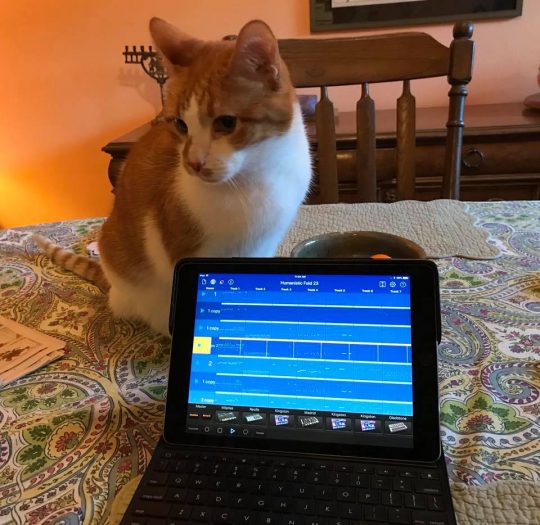 Cat “Inspecting Gadget.” More specifically, a cat with the Korg Gadget app for iOS. From Ken Karsh on the Facebook group iPad Musician.

Today we look back at last week’s show at Canessa Gallery in San Francisco, featuring Elliott Sharp, Tania Chen + Wobbly, and Euphotic. This show was the subject of CatSynth TV Episode 8, and you can see and hear a bit of each set.

We were quite pleased to see Elliott Sharp. We saw him back in the 1990s, but it’s been a while since he made it to the Bay Area.

He has a unique and idiosyncratic sound, with fast runs, harmonics, and extended techniques, along with electronics. The electronics, which appeared to include some looping, sampling, and delay, did not overpower his guitar playing, and the individual gestures, from frenetic fingerpicking to expressive scratches, came through strongly. Although his style is unusual, it is still quite melodic and harmonic, something that comes out particularly in a solo-performance setting.

The sound was subtle and detailed, with a lot of short sounds clustering like schools of fish. Djll’s electronics bridged the space between Cheryl Leonard’s organic sounds and Bryan Day’s more chiseled electro-acoustic creations. There was also a quality in Day’s performance that foreshadowed Elliott Sharp’s sound and style later in the evening.

Euphotic was followed by a duo featuring Tania Chen on electronics, voice and found objects, with Wobbly (aka Jon Leidecker) on electronics. He had an array of iPads linked together.

The performance centered around “Feasibility Study”, an episode of the television show Outer Limits, slowed down beyond recognition. Chen’s vocals and found-object performance featured material and ideas from the episode, including chomping on biscuits and pop rocks to represent the rock-like aliens in the video. She also performed a melodic section on an iPad, which complemented Leidecker’s complex electronic processing. His sounds were slower and more undulating, providing an eerie setting for the overall performance.

We had a great time at this show, as did the rest of the audience that filled Canessa Gallery to capacity. We look forward to more interesting music from these artists and from this venue. And thanks to Bryan Day for continuing to host this series.

Skinny the cat shows off his Akai MPC Touch controller and software synths. We also see a bit of modular lurking in the corner 😺

“Another one of my restored space echo’s now for sale on ebay.

Ive got an iPad with the app ‘Fugue Machine’ playing through one input and live electric violin on another. Just a quick jam showing that this space echo is working as it should.

My cat loves the space echo… unfortunately she cannot be left alone with it because she’ll chew up the tapes!

Pinch roller and tape heads are in excellent condition. Sounds great , with minimum wow and flutter.
Very nice unit!
Full service has been done on this unit including polished tape heads.
youtube demo coming soon…
SHIPPING
$145US SAL economy Air (approx 1-2weeks) .
This item is 100v 50/60hz you may need a power converter depending on your country.”

We at CatSynth are excited to announce the release of our newest app Highway☆ for iPhone and iPad, available on the App Store!

This app comes out of long-term interest in highways and road travel, something we explore periodically on this site. It’s a sort of “Pokemon Go” for travelers and road geeks, where you can discovery and collect highways as you travel.

It also has features for exploring new places on your device, and finding more information about the roads. You can also connect with other users and compete for the top scores.

It is completely free, so please download and have fun, especially if you are planning to hit the road this summer. And please let us know what you think or if you have ideas for new features 😺

And we are currently busy at work on an Android version, which we hope to share soon.

It is smoother and simpler to browse and read articles on your mobile device. And for the built-in Mystery Synths, we have added MIDI input support!

You can play the synths with an external MIDI controller or sequencer using either the network or (on iPads) a class-compliant MIDI USB device. We will have some video demos of this soon.

If you have an iOS device, please do try out the app and let us know what you think! 😺

We’re happy to release the first major update for the iPhone/iPad version of CatSynth: The App!. 1.4.142 (yes, it’s the square root of 2) has the following new features and improvements:

It’s that last one that really took the longest: the under-the-hood improvements using a completely rebuilt backend. We might have more to say about the technology that went into it (it’s pretty cool from the point of view of a computer-science geek), but for now we simply ask that if you have an iPhone or iPad, please download and enjoy the new app.