NAMM is full of serendipitous moments. One of those occurred as we passed the WMD booth and saw a live performance unfolding with flute and woodwind virtuoso Pedro Eustache performing on a vintage wind instrument controlling a WMD Synchrodyne module.  We featured it on CatSynth TV.

Eustache informed us that his wind instrument was an unusual one from the 1970s, and that he was using it as a CV controller for the Synchrodyne.  He found the combination to be quite expressive and complete, and we can certainly hear that in his performance. 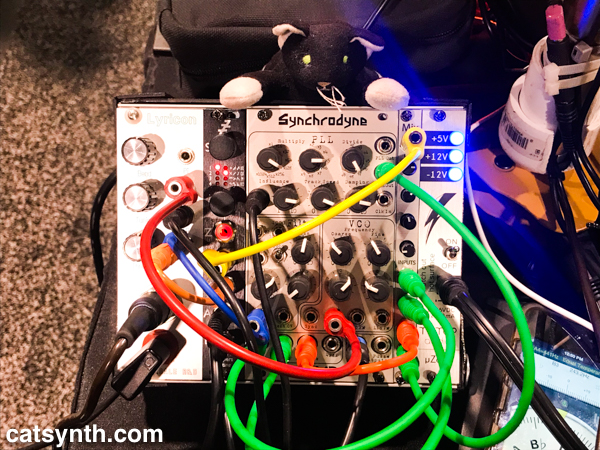 The Synchrodyne is intended to be a complete synthesizer voice in a module, and it has the combination of sawtooth VCO, filter, and VCA that are the building blocks of subtractive synthesis.  But it also includes a built-in Phase-Locked Loop (PLL) controlling the VCO, which adds a variety of new sound and control dimensions.  PLLs can be challenging to use – the concept implies stability but often includes chaotic phases – but controls on the PLL for dampening, speed and input influence provide more musical control.  Additionally, the VCO provides support for frequency modulation.  Finally, there is a wavefolder on the front end of the filter that provides additional non-linear signal processing and distortion options.  WMD puts it succinctly in their description of the module:

Containing several pieces to a traditional synthesizer voice, the Synchrodyne is a powerful addition to any subtractive oriented system. However, it is designed primarily as an experimental sound source/filter, intended to push the limits of modular synthesis…WMD style.

This is not your classic subtractive analog synthesizer voice, as one might find in a Moog synthesizer or the Korg Prologue that we reviewed in an earlier article.  It is a beast, but with practice, we see how it can be an expressive musical instrument on its own. We look forward to trying it out ourselves one of these days.  And we thank Pedro Eustace for being so gracious after the performance and sharing with us his process making music with the Synchrodyne and his wind controller.  From his official website:

“In Pedro’s own words: ‘I simply hope–and I really work hard at this, through ‘active submission’–that someday, whenever I see my Creator I would be able to give Him an answer worthy of the ‘package-of- grace’ he entrusted me with.'”