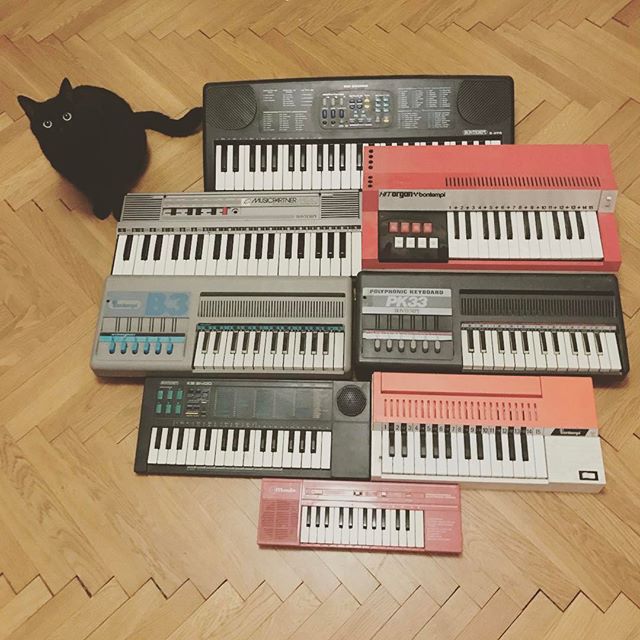 A black cat posing with several vintage small keyboards, including some familiar ones from Casio and Yamaha. From Milomi Studio on Instagram.

Some of these keyboards may be considered “toys”, but they are still musical instruments. I coveted some of these small keyboards before I discovered synthesizers. I do now have a Casio SK-1 that gets used in live performance.

Some epic circuit bending anchored by a cat keyboard toy 😸

In honor of #NationalCatDay, the cats have taken over my Dave Smith Instruments Prophet 12.

Luna and I wish everyone a day full of feline and musical joy.

For this year’s holiday edition of Weekend Cat Blogging, we have scenes from our rather casual observance of Hanukkah.

Luna inspects the iPad-based menorah after the fourth night (which happened on Friday). The iPad app is from an Israeli studio, and has simulated oil flames rather than candle flames. It has the traditional prayer in Hebrew, which I cannot read particularly well – growing up, we either said it in English or from transliteration.

We do have a real menorah as well, but Luna is not allowed near it. You can see it in this post from the past.

Luna did get some new toys to play with. She is quite fond of the catnip-filled variety.

Weekend Cat Blogging #342 is hosted by Jules and Vincent, at Judi’s Mind Over Matter. Check out their great black-and-white photos.

Carnival of the Cats will be hosted tomorrow by Billy SweetFeets.

The Friday Ark is off this week for the holidays.

With delays in the construction at CatSynth HQ, I decided to bring Luna home for the weekend. It is nice to have her home, even though it is only temporary.

As one can see in the above image, things are a bit out of place in anticipation of the work, but that doesn’t stop us from enjoying our time here. Here we see Luna checking out a new toy (a birthday present from a friend of ours):

Note the picture frames neatly resting on the stairs behind her. Much of the artwork (paintings, prints, etc.) had to be moved as well.

Weekend Cat Blogging #287 is at Mind of Mog.

Kashim, Othello and Salome are pulling double duty this weekend, hosting both the weekly Carnival of the Cats and the monthly Bad Kitty Cats Festival of Chaos. We suspect they are going to be busy.

And the Friday Ark is at the modulator.

This past Thursday we celebrated Luna’s adoption anniversary (aka “Gotcha Day”).  For Weekend Cat Blogging we present some photos from our celebration that evening.

Of course, there was yummy food.  In this case, Sardines, inspired in part by a (human) recipe I had heard on the radio few days earlier and still want to try out.  Luna devoured her feline fish treats with aplomb:

There were some cards from friends.  And of course, new toys.  I was particularly fond of this toy, which seemed apropos of this year:

Luna was not quite as interested (though I did see her kick it around briefly):

On the other hand, she took right away to this black mouse toy and spent quite a bit of time kicking it around, even getting it stuck on a shelf and pawing diligently to get it out.

And after a spell of vigorous play, it was time to relax:

Not only is this Luna’s fifth adoption anniversary, but it is also the 5th Anniversary of Weekend Cat Blogging. It was started by group of primarily food bloggers who set aside a post on the weekend for their cats. We found it back in 2006 as I was first starting this site. This special edition is being hosted by LB and breadchick at The Sour Dough.

The Carnival of the Cats will be up this Sunday at Nikita’s Meowings of an Opinionated Pussycat. And the Friday Ark is at the modulator.

The theme for this weekend's Bad Kitty Cats Festival of Chaos is “toys or boxes.” And we at CatSynth have both toys and boxes. Luna received a package this week from a friend of ours, conveniently arriving for both her “burfday” last weekend, and Channukah this week. What's inside the box? Well, we have birthday cards:

and of course some fascinating new toys:

Yes we have been packing up things here at “soon to be former CatSynth HQ”, even though we're not entirely sure where it is we are moving to.

Thanks to everyone who wished Luna a happy birthday last weekend. We will pay individual visits to everyone as soon as we can.

The Bad Kitty Cat Festival of Chaos is being hosted this weekend by Samantha and Tigger at Life from a Cat's Perspective. Weekend Cat Blogging is being hosted by our friends Upsie and sher at What Did You Eat. Upsie is still working through her diabetes, and we wish her well.

Carnival of the Cats is being hosted by our friends Megan and the Bad Kitty Cats. And of course Friday Ark #168 is at the modulator.

Tonight we feature the much-discussed performance from the 7th Annual Skronkathon two weeks ago. I did a solo electronic set featuring myself playing laptop (running [http://osw.sourceforge.net]Open Sund World[/url]), the Indian ektar and gopichand string instruments, a toy piano, the DSI Evolver, and of course my quacking toy duck (everyone loves the duck).

This recording was done my Matt Ingalls for the sfSound Radio broadcast. I edited it a bit, mostly cutting out the empty bits or embarrassing errors.

You can see a photograph from the performance here and more info about the technical preparations here.

For subscription and listening options, click the “CatSynth Channel” icon in the upper right or the subscription link at the top of this post. And as always, enjoy!